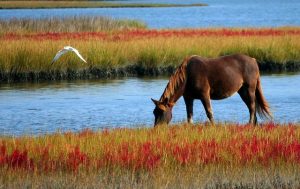 Worm infestations are a common cause of diarrhea and can cause impactions (blockage of the intestine) and colic. New research, and a fresh look at old research, is showing that intestinal parasitism continues to be a problem for horses. We are finding that our continual use of dewormers has helped select populations of parasites which are resistant to the deworming drugs.

How are my animals getting infected with worms?

It helps to understand how these organisms get into your animals. Very generally, intestinal parasites get into their host (your animals) by being ingested. They then develop and live in the intestines and begin to lay eggs, which are passed out of the animals in their stool, ending up on the ground where they, after some development in the environment, can reinfect the same animal or infect a herd mate or neighbor when ingested as the animals browse around looking for something to eat.

Eggs and larvae are generally very resistant to environmental extremes of temperature and moisture levels. In our local environment of dry lots, paddocks and stalls, infectious larvae still get spread from one area to another by wind and by birds and rodents moving manure about.
Even animals housed in a dry environment, who never leave their paddock, can become infected with parasites. Research in horses tells us that the distribution of parasite infestation is not evenly distributed throughout the population. In a herd of horses, most will have low to moderate parasite burdens and a few will have very high worm burdens and continue to contaminate their environment.

When you travel with your animals, they are at increased risk of exposure to parasites left behind by other animals. That little pile of dried-up fecal balls in the stall that you put your horse in for a few minutes at that show. The breeder from somewhere far away who stepped into your alpaca’s pen with manure stuck to the bottom of his shoe. The lush green high-mountain meadow the horses are on that was grazed last week by another group of packers. These are all areas of potential exposure to GI parasites.

How do I know what dewormer to use and when to use it?

Deworming your animals is important, but it is only part of the solution to keeping parasites under control. Regular parasite testing and removing manure from their environment are just as important. Parasites are very adept at surviving in the environment and can infect an animal years after their eggs have been laid.

We categorize dewormers by the class of drug: bendazoles, pyrantel, avermectins being the “big three,” approved for use in horses. We used to recommend switching from one class (not brand) of dewormer to another with each deworming. However, after running a fecal egg count reduction test, we may eliminate one or more of these from use forever for a given animal.

Regular deworming may not work as well as we thought, due to the increasing incidence of parasites that are resistant to the dewormers. A population of worms can become resistant to a particular class of dewormer. A population of parasites does not acquire resistance to a deworming agent due to repeated use of the drug. Rather repeated use of the drug kills off the susceptible population, leaving behind those that, through genetic variation, can survive despite the drug. Those resistant worms continue to reproduce, creating a large population of worms for which the deworming drug is ineffective. For this reason, it is important to regularly test your animals for parasites.

Not all parasites are found in a fecal test. Tapeworms, even when present, do not reliably show up on a fecal test. Bots won’t appear in a fecal test at all. With this knowledge we recommend deworming at least once a year (generally in the fall) with a dewormer that will address these parasites- a combination of an avermectin and praziquantel. Test the horses twice a year, spring and fall, and address other parasites found in the fecal test on an as-needed basis.

The cost of fecal egg count testing may easily be offset by decreasing the amount you spend annually on dewormers. For an animal with a resistant parasite infestation, the cost may be a bit more initially, but the savings will be seen in not purchasing an ineffective dewormer in the future and more importantly in providing the most effective health care for your animal, hopefully lowering vet bills for parasite-caused problems.

Are dewormers harmful to my animals?

At the proper doses, dewormers are not toxic to the animal they are labeled for, even though they are to the parasite. Many of the deworming drugs are not even absorbed into the blood, but just pass through the GI tract, killing worms on the way through.

Most dewormers have been tested and found to be safe at 4 to 10 times the effective dosage in certain species. They have been tested and found to be safe in breeding and pregnant animals at all stages of gestation. Although you may have heard that deworming during certain periods of gestation may cause birth defects or abortion, there is no evidence in safety studies to back this up. The best place to look for reliable information on this is the Food and Drug Administration (FDA)’s website.

Overdosages or use in sick or severely infested animals may cause illness though. Collie breeds of dog (Australian shepherd, border collies, etc.) are very sensitive to avermectins. While they can be safely given ivermectin at low doses for heartworm preventative, dogs can be poisoned from getting the remainder of a tube of horse paste. While in theory a dog could be poisoned from ingesting horse manure after deworming, practically the amount of manure that would need to be ingested is huge, and this is unlikely to happen.

It is important to test your animals for parasites regularly. Appropriate deworming is important and different for each group of animals, depending on their home environment, how they are fed, where they travel, and what they are exposed to. It is just as important to clean their environment and pay attention to potential parasite exposures when you travel. Your deworming protocol is one of the topics we should discuss during semi-annual wellness exams. Give us a call to schedule an appointment or talk about your parasite control plan.

Font Resize
Contrast
Accessibility by WAH
Call Us Text Us